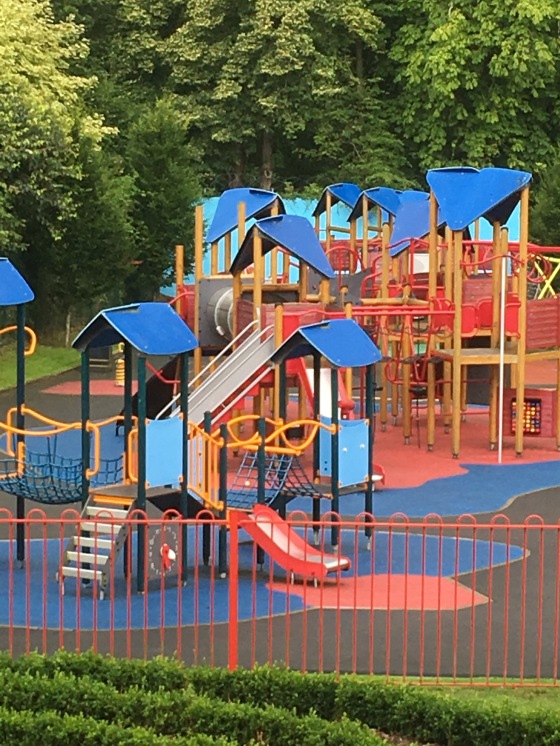 It’s not like I haven’t looked after my son by myself before. In fact I do it at some point on most days. But it’s just a bit different when mummy goes away for a girls’ night out. It’s like the safety net has been removed. You know you’re on your own.

It also means I can’t pull the usual trick of hiding in the toilet for half an hour reading my kindle, just to get a little bit of respite.

I know from past experience the trick is some good planning. Mummy leaves shortly after lunchtime so I take him straight to Frankie and Benny’s, one of his preferred eating places. We get a good table, I work out the wifi quickly and he’s sitting there contentedly eating chips and watching PJ Masks on my phone. I relax a little. It’s all going well.

I take a large bite of my burger and hear and feel a sickening crack as my teeth hit something hard. I splutter my food and a sizeable chunk of tooth into a napkin. My tongue frantically feels for the damage and finds a hole about the size of Greenland. One of my canine teeth has snapped in half, leaving me looking like a sober Shane McGowan. I know I’m going to need an emergency dental appointment but it will have to wait. Across the table my son is completely oblivious to what has happened. It seems like a bad omen.

The rest of the meal passes uneventfully until I go to pay. Our waiter has been incredibly attentive and helpful and he tells me that if I download the Frankie and Benny’s app then my son’s meal will only cost one pound. It seems like a decent offer and I don’t really want to hurt his feelings so I go along with this. Unfortunately this results in the poor waiter having to show me how to download an app on my phone, a task similar to trying to teach a donkey brain surgery. Only less elegant.

Eventually we succeed and I get the bill. I have saved £3.50. The waiter hands me the card machine and stands there smiling sweetly. The machine asks me if I want to leave a tip. I look up, he’s still smiling, eyes locked on me. I leave a £3.50 tip.

Throughout the day I had promised my son I would take him to the park in Hillsborough. He loves it there and it’s a good way to exhaust him before bed.

Several times he’s asked me. ‘Daddy, are we still going to the park?’

‘Yes we are,’ I patiently reply.

We leave the restaurant. It’s lashing with rain. I hadn’t counted on this. I try to explain that it’s too wet which leads to a mini-tantrum. I promise him we will go when the rain eases. He nods but I can tell by his eyes he doesn’t believe anything I say anymore. We kill some time back home where he releases frustration by taking every toy he owns out of its box and depositing it on the carpet. Mummy had asked me to do some hoovering while she’s away but you have to be able to find the carpet first.

After an hour the rain has slowed just a little. I plunge his feet into welly boots and make a dash for it. Needless to say the park is entirely deserted. I mean who takes their child to an outdoor play facility in the rain?

He wants the swings first so I’m bent over using a tiny paper hanky to dry the seat. As I straighten up the top of my head crashes into the horizontal metal bar which holds the top of the swing. The whole frame shakes and I’m left dizzy and reeling, fighting to remain standing as I stagger like a drunk. My son thinks I’m playing a game and yelps with delight.

I’ve got a large bump on the top of my skull and a headache but I persevere, pushing the swings, spinning the roundabout and helping him climb ladders as the rain thumps down. When he tires of this he decides he wants to run around in the wet grass and jump in puddles (thanks for nothing Peppa Pig). It dawns on me that by putting his wellies on I have encouraged this. I’m dressed for a dry summer day but I’m dragged through the soaking grass, slithering and sliding until, inevitably, I end up on my arse.

Our clothes are saturated now so I decide we’d better move on. He accepts this without complaint and as a reward for being good I take him to the shop for a treat. Just at the moment when I’m at the counter paying for a bag of crisps and a Kinder Surprise egg he runs at me full speed and head butts me right in the testicles. I’m winded but pretend to laugh it off in front of a bemused looking shop assistant.

It’s coming to the part of the evening I’ve been dreading. Bath time. I say bath time but my son has recently decided he isn’t going near the bath ever again so it’s shower time really. Of course he’s not much keener on the shower and it’s usually a two person job to wash him. One in the shower controlling the water and one outside forcing him in.

But I’m on my own tonight.

What follows descends into something which might not have looked out of place as a Benny Hill sketch as he flees, bare-bummed, while I give chase down the stairs holding a soapy sponge. I decide not even to attempt washing his hair tonight.

After the bath is quiet time. He decides he wants to mark this by having a fully-scripted wrestling match on the bed. He insists on being Big Daddy which leaves me as Giant Haystacks. Again.

We follow a set plan which includes me knocking out an imaginary referee and then attacking Big Daddy while he attempts to help the prostrate official. Fortunately Big Daddy recovers and the match is concluded when he belly charges Giant Haystacks off the bed (I swear I’m not making this up).

After a drink of milk we settle down for story time but he’s so exhilarated after the wrestling that it takes some time to calm down. He’s a little uncomfortable with mummy being away so he asks me to lie beside him until he falls asleep. I say he asks but orders would probably be more accurate.

Eventually I calm him down and he closes his eyes. I think he’s almost over when mummy calls on Facetime to say goodnight. This gets him going again and he soon tells me that he now intends to stay awake all night. Great.

But exhaustion quickly overcomes him. Within minutes I’m stroking his little face, still flushed from all the excitement of the day. I give him a quick kiss and move downstairs. I know I’ll probably write for a little while. Then I’ll do some reading and have an early night.

He’ll be awake in just a few hours ready to do it all again.