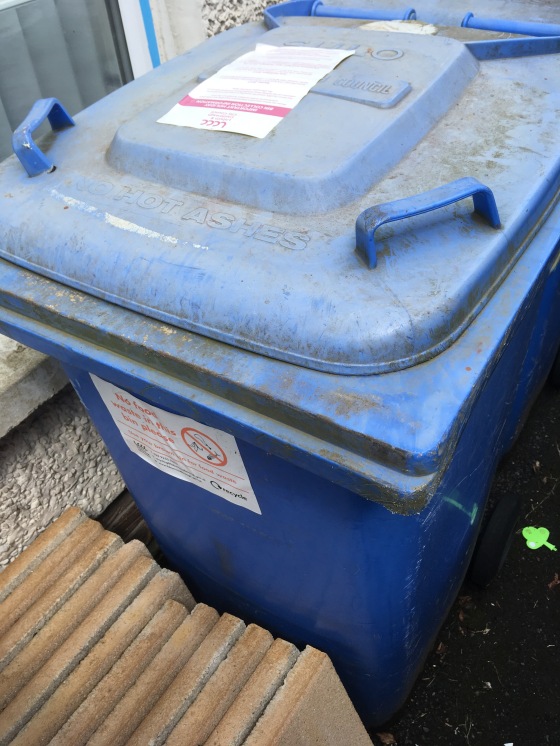 I was considering how I now spend an inordinate amount of my time sorting various types of rubbish into various coloured bins.

Black, blue, brown, green. While I’m keen to do my bit for the environment it is a time-consuming chore.

The situation reached a critical point after my son’s birthday party when I seemed to spend days on end ripping up cardboard boxes and stuffing them into an already over-full green bin.

Come bin day, clothed in my rather aged pyjamas, I dragged the creaking bin to the end of my driveway to be mercifully emptied.

But alas I discovered at the last moment there were still a few cardboard boxes to be disposed of.

Looking back now I should have just settled for waiting until the bin was emptied and then put the new boxes in.

But no, I determined that there was still more room and began to attempt to crush yet more cardboard inside the bin.

Soon I realised more weight was required so I scaled the little wall at the end of the garden and climbed on top of the open bin.

Still nothing happened so I found myself resorting to jumping up and down inside my bin to try and force the material down.

To reflect for a moment. It’s eight in the morning, kids are going to school and adults to work and here’s this strange bearded man in ragged pyjamas jumping up and down on a bin.

Yes, I got some strange looks.

As I increased my physical effort in jumping something inevitably had to give.

Alas it was my pyjama trousers which cleaved with a sickening ripping sound.

It would not begin to do justice to the situation to say I had split my trousers.

A better description would be to say that two pieces of fabric which had lived together peaceably for years were now divorced with a clause in the final agreement that they should stay at least a yard apart.

Now panicking and keen to avoid ultimate disgrace I started struggling to make my way out of the bin, but my wild writhing succeeded only in making my feet sink further into it.

For one desperate moment, as I saw a car approach and realised I was stuck, I actually considered ducking down and closing the bin lid over my head to conceal my identity.

Eventually I fought my way out and scrambled back indoors resembling Dr Bruce Banner after he has changed into The Incredible Hulk.

Except with a bare arse.

Has this ever happened to anyone else?