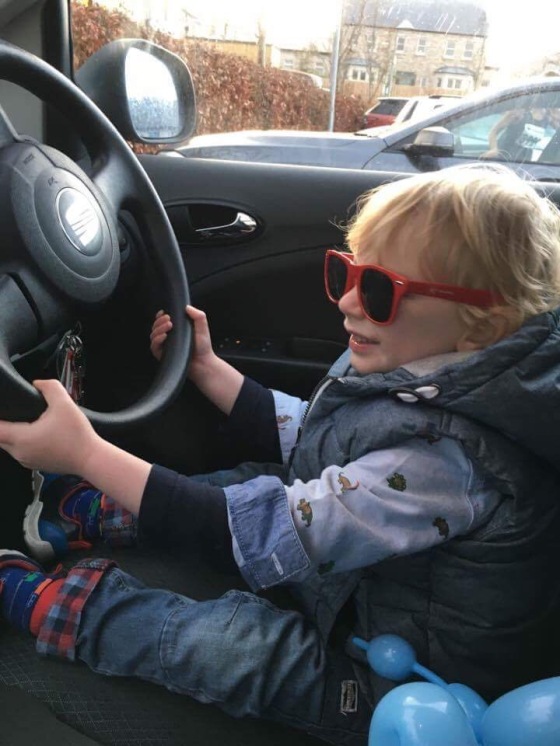 That’s the theory anyway. Tell other people, find out it’s not just you and then paddle in the pleasant warm waters of empathy.

And I’ve certainly been doing my bit in the sharing stakes. Since I revealed my struggles with dropping my son off at childcare last week (see https://whatsadaddyfor.blog/2017/07/26/the-morning-run/) I’ve been invited onto the radio to talk about it and been swamped with advice, sympathy and tales of other people’s experiences. The original post has now been read more than 1,200 times.

But the sun continues to rise and fall no matter what I write and soon it is time to rinse off the drips of self congratulation and put myself back where it all started; taking him to childcare.

I’m always looking for signs of progress. Not huge leaps, just enough to reassure that we’re moving in the right direction. And I’m really pleased to report that this week has been better.

Through gentle pressure and reassurance we’ve been able to get him out of the house without any tears or tantrums. Those who’ve read last week’s piece will know how big a step this is. A special thanks to the correspondent who suggested I try giving him little photos of him with me and mummy to bring with him. This worked really well.

The trip in the car has passed without incident. In fact the only problem has been the handover, that’s when it still all goes wrong.

He’s still clinging limpet-like to my neck and still melting into a mush of tears as I leave. Holding his little arm out to me, pleading, pleading.

This is where I have to go beyond my own powers of reason and experience. In my mind the reaction he is showing is one of catastrophe. One reserved for death, permanent separation, Scotch broth for dinner.

But to him this reaction is one that merely relays a bit of anger and annoyance. I also have to consider his subconscious power of manipulation. His innate ability to know how to react in the way which pushes certain buttons to get the result which he wants.

I have to force myself to believe this because, well because, what other choice do I have?

All of his little pals are there. He talks about them constantly. Indeed he has announced on more than one occasion plans for his forthcoming marriage. Unfortunately it hasn’t always been to the same girl.

I watch my son closely. I know his reactions, his habits. I don’t feel there is any lasting trauma being caused to him by the process. I simply wouldn’t allow it to continue if I believed there was. My point from last week still holds. It’s harder for the parents because we project our emotions onto them. Kids always surprise us with how robust they are. We’re the ones who are made of china.

But even the most stressful experiences can still provide a memorable moment, a feeling that you know will still be with you when the specifics of the incident have faded. Facts are quickly forgotten, feelings stick with you.

There’s often a chink of light to be found when you’re lost in a cave, a diamond in the deep mine, a pearl in the black ocean.

This morning mummy was showering my son with kisses as we prepared to leave the house. She told him the kisses were like sunshine and if he kept them in his tummy then he would have sunshine all day.

He looked at her, thinking. Then he responded.

‘Mummy can you give me some rain as well? Because then I’ll have a rainbow in my tummy.’

One thought on “The morning run revisited ”