There is something momentous, almost sacred, in the cutting of a young child’s hair.

Perhaps it’s because the kid inevitably looks older with the shorn locks.

Perhaps it’s the physical act of removing something which had been part of their body since infancy.

Whatever the truth it’s a process that can easily land a daddy in a whole heap of trouble.

When Gertrude awakes she finds her beloved son ‘cropped like a sheep’ with a ‘myriad of crescent shaped curls, like the petals of a marigold scattered in the reddening firelight.’

I don’t possess Lawrence’s eloquence but suffice to say that Mrs Morel goes native and very nearly bates the head off her husband.

Now Mr Morel is a pretty unsympathetic character, a brute who gives his life and money to alcohol rather than his family. But this is one of the rare moments when I feel some sympathy for him.

But the incident represents the beginning of the decline of the Morels’ failing marriage. Things are never quite the same.

‘He felt something final had happened.’

All over a haircut.

I remember first reading this when I was at school and thinking the passage was very strange. But now, as a daddy, the exchange makes a lot more sense.

My son has inherited the same mop of mad wavy golden hair that I had as a child. When it grows a bit and goes curly it’s a guaranteed shortcut to an ‘Aw bless’ from every old lady we meet in the street.

If I was to take the scissors to my son’s hair I suspect my wife would not show the same restraint as Mrs Morel.

In my own childhood my mother seemed unable to bear the thought of having my hair cut at all. I think she was secretly hoping that I would be a girl.

In most of the old photos I’ve got big hair. Really big hair.

I look like a miniature version of Michael Bolton.

But hair does have to be cut. To be tidied.

So I took my son to the kiddie barber today.

I usually take him because…well because I have nothing much better to do.

But even though I’m theoretically in control, mummy has already texted ahead to give our brilliant barber the instructions.

I’ve never seen the content of any of these texts but I’ve always assumed them to go something like, ‘Ignore everything daddy says.’ And quite possibly ‘Apologies in advance for him.’

I’m clearly not to be trusted with big decisions like this.

The obvious fear is that if it’s left to me my son will come home with a multi-coloured mohican, a pierced eyebrow and a Hitler moustache tattooed onto his upper lip.

The haircut itself takes no time. My son sits happily in a toy green car watching a film while the barber snips away efficiently with the scissors.

The only momentary complication is when, dampening down his hair, a tat is discovered. My son’s mop seems to have made a unilateral decision to form itself into dreadlocks.

But soon it’s finished. He looks more like a boy than a toddler now.

Snippets of his hair lie randomly sprinkled on the ground like the petals of a daisy after a little girl’s innocent game of He Loves Me. (Ha! Take that Lawrence!)

And ever the pragmatist, I decide to take the opportunity to get my hair trimmed also.

I get exactly the same treatment as my son, except I’m not allowed to sit in the green car.

I’ve never much enjoyed going to the barber. I’ve always found it a bit awkward. Not really knowing what to say to someone holding a pair of sharp scissors just inches from my throat.

But now, as I slide lazily through my forties, I’ve found two I’m completely comfortable with in the same village where I live.

I get my hair cut twice as often as my son so I alternate between the Turkish barber and the kiddie barber.

The Turk seems to enjoy my bad jokes and, even though I suspect he doesn’t have a clue what I’m saying most of the time, we get along famously.

He does weird things, like setting my ear hairs on fire. And all at no extra charge.

Every time I leave him there’s a burning smell around my head for the rest of the day.

We also bonded over the fact that we started growing a beard at the same time.

But while mine is determinedly still growing, defying fashion and public opinion, he had to shear his off after his own mum told him he looked like a member of ISIS.

The kiddie barber allows me to natter away contentedly and even makes me nice cups of coffee.

Every so often my inventive flow is momentarily interrupted when she asks a question like ‘Well, what would you like done with your hair?’

I shrug and allow her to do her stuff. The truth is she could shave a giant phallus into the back of my head and I probably wouldn’t notice.

In fact she may already have done so. I don’t look back there too often.

But I assume not. My son likes the tight-cropped effect of my newly shaved head.

He insists on touching my head sporadically for the rest of the day and wanted to go to sleep with his face against my velvety crop.

This was obviously comforting for him. Awkward for me.

The thing is my son will be starting school in a few weeks. We want him to be well turned out. To look smart.

The haircut is part of the process of transforming him from our boy into a boy.

Mrs Morel knew it. My wife knows it. And I suppose I now do too. 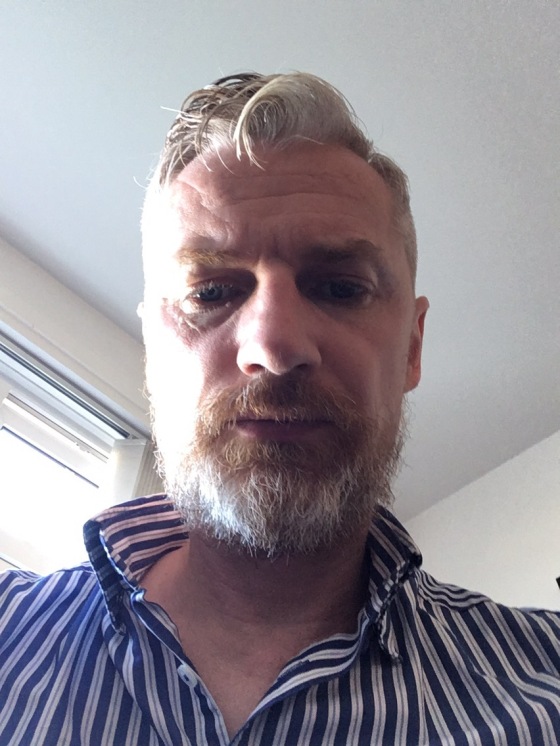 One thought on “The haircut ”