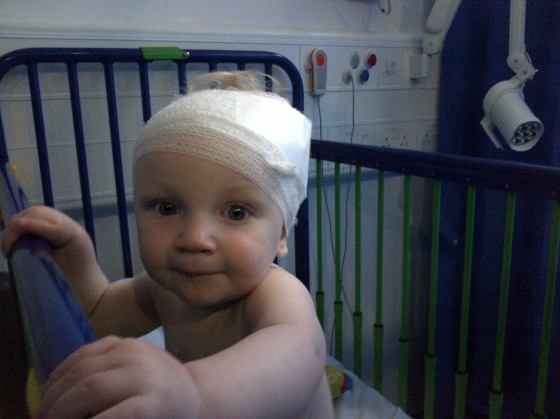 I was driving when I heard the phone.

I glanced at the glowing, throbbing screen on the seat to my left.

I could see the name. It was my wife.

I was on the M1. I knew I shouldn’t have answered.

But I could think of no reason why she would be calling at this time. I was on my way home from work.

I lifted the phone.

Her voice was in a place beyond fear. It was some seconds before I could understand what she was telling me.

‘He’s had a fit. He’s in accident and emergency.’

I tried to calm her a little and changed course.

I knew what was happening.

Since birth my son had had trouble with his ears. He was prone to infections.

The infections could lead to rapid temperature spikes.

These spikes could lead to seizures.

Febrile convulsions, the doctors called it.

Our son was one-year-old. The most vulnerable age for this type of condition.

He had ended up in hospital once before. The Royal. When he’d had a mild seizure.

I had been at work at the time but mummy described it to me. It sounded scary.

Since then we’d been obsessive in looking out for the signs.

The thermometer was never far from his ear.

At the first sign of a temperature rise we filled him with Calpol and Nurofen.

This time it sounded more serious. He had been with his grandparents when the seizure took hold.

They had rushed him straight to the emergency department.

I arrived at the hospital reception demanding to know what was happening with my son.

Luckily a nurse who was involved in treating him was standing nearby and brought me straight to a large room.

The only useful way I can convey the scene there is to compare it to something from a TV medical drama.

I’ll never be able to forget it.

The tiny body of my infant son was stretched on what seemed to be white table. A team of doctors and nurses were in motion around him.

His legs, arms, head and body were in spasm, trembling horrifically.

There was a mask on his face and pads stuck to his tiny weak chest. A plastic tube seemed to be running from his leg.

He was so small, wearing only his nappy. Just one year old. Utterly helpless.

Mummy was there. She kept asking the staff to tell her that he would be OK.

But they can’t tell you that. In case they’re wrong.

The seizure had been going for more than 20 minutes. We knew from what we’d read that it was now in the dangerous stage.

And still it went on.

One of the nurses told mummy and me to talk to him.

I didn’t know how I could find my voice. My own mental health was still not in a good place.

But a thought started to go through my head.

‘If ever you’re going to be a daddy, this is the moment.’

This is the moment when he needs his mummy and daddy more than ever.

Mummy stood on one side of him and I on the other.

We stroked his little arms and talked to him.

The one part of his body which seemed to be operating properly was his eyes.

Looking at his parents.

The shaking seemed to go on and on.

And then, finally, it stopped.

And he began to cry.

The merciful, joyful, wonderful sound as he bawled in terror and frustration and rage.

I remember a nurse saying to us, ‘You see, he’s crying, that’s a good sign.’

The doctors were quickly satisfied that he was out of danger and mummy was able to take him in her arms.

The two of them sobbed. Mixing their tears as one.

I went and sat down.

The danger was over but the ordeal was just beginning.

The doctors wanted to transfer our son to the Ulster Hospital where he would be kept in for tests and monitoring.

In case it happened again.

Mummy went with him in an ambulance while I drove home to grab some belongings.

The events I am recalling took place three years ago.

Had the seizure occurred tonight then the Lagan Valley Accident and Emergency department may not have been open. It was a 24 hours service then. Now it closes at night.

I arrived at the Ulster. The same hospital where my son was born.

He was in a ward with mummy. A cot for him. A chair for me.

A doctor came to talk to us. To explain what had happened.

I asked him if there would be any permanent damage caused by the longevity of the fit.

He told us we might not know that for years.

Mummy snuggled up to sleep with our boy in the little cot while I tried to make myself comfortable in the chair.

The World Cup in Brazil was just beginning and I remember watching the opening match on a tiny screen above the cot while the two of them slept below.

A few days and sleepless nights passed in boredom.

They wanted our son to stay in or close to his cot while he was being monitored.

But energy was returning to his body and keeping a one-year-old cooped up in a tiny space like a battery hen led to a multitude of tears and tantrums.

I brought him toys.

He hurled them back at me.

And so the days passed.

One other unexpected and distressing complication arose.

While in hospital the doctors need a simple and quick way to insert drugs or fluids into a patient.

Rather than continually use needles they insert a line directly into the vein. A tiny soft intravenous plastic tube which can be accessed at any moment.

But they had desperate trouble finding a suitable vein in my son.

They injected his legs and arms so often without success that he could have passed for a miniature heroin addict.

And on the rare occasion when they did find a vein he yanked the line out.

Because that’s what an active one-year-old will do when you stick a tube into his body.

A doctor took mummy and me aside and told us they had only one option left.

They were going to have to put the line into his head.

Stick a large needle into my one-year-old boy’s head.

They took him away to a separate room.

They told me to go back to the ward.

They said it would be too upsetting for a parent to witness.

I told them I was more concerned about the upset caused to my son than me and if anyone was going to stick a needle into my son’s head then I was going to be there.

I hadn’t slept in two nights. I was a little cranky.

They closed the door on me.

I tried to look in through the frosted glass. I heard screaming and struggling.

They asked me if I could come in to help calm the boy down.

I went inside and held my son tight in my arms. I talked to him constantly as I saw the doctor behind his head closing in with the shining needle.

He began to scream and his limbs tried to bolt but I held firm.

His eyes never left mine.

I carried him back to mummy who consoled him, both crying again.

Putting the line in his head solved one problem.

But it didn’t stop him trying to yank it out.

As a solution the nurses wrapped a large bandage around his skull, covering the tube.

So he started to pull the bandage off.

A long night passed like this, with him ripping off the bandage and mummy and me taking it in turns to go and ask the nurses on the graveyard shift if they could redress his head.

More trauma followed the next day when my son had to undergo a lumbar puncture.

This involves an injection straight into the spine. To search for any sign of nerve damage.

There were a lot more tears but, in truth, I can’t remember it very clearly. I think after three sleepless nights my brain had simply folded and my ability to retain information was exhausted.

Tests were carried out and results were delivered.

And finally the doctors released us.

We went back to our little house. Welcomingly messy.

We kept looking for the signs.

It was quite a while before our son could even sneeze without mummy running for the Calpol and me scrambling for the car keys.

His health dramatically improved when we paid privately for him to have vents inserted into his ears.

There were no more seizures. Now he is as healthy as any other little boy.

And he’ll be starting school in a couple of weeks.

He’s a long way away from the angry toddler prowling around the hospital cot with an oversized bandage on his head.