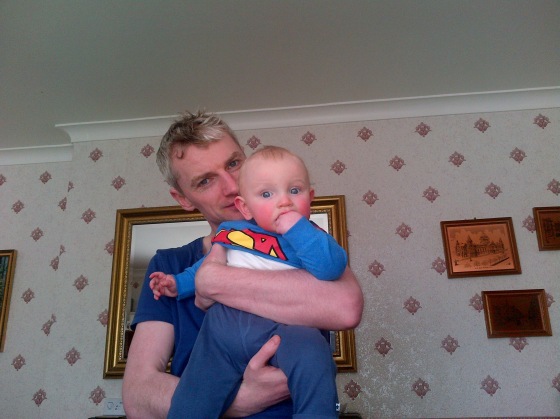 The uniform is bought. The new schoolbag and pencil case too. The shoes are brilliantly black.

Mummy and I will both be there in the morning to take him to the P1 classroom. To show him where his desk is. To introduce him to the teacher.

Undoubtedly there’ll be tears. From him and us.

We’re as ready as we can be.

But yet something doesn’t seem quite right. There’s something about the whole process which makes me want to yell ‘Stop!, it’s too soon!’

I suppose that’s the curse of the parent. The emotional tic. The feeling of never wanting to let go. The feeling that he’s better off at home with mummy and daddy.

But perhaps there’s something more profound at work here as well.

My son’s birthday is at the end of the academic year. There’ll be kids in his class almost a full year older than him. A year means nothing to us but to a four-year-old it can be an unbridgeable chasm. That’s a world of physical and emotional development.

I have friends whose children were born two months premature. They are also starting P1 but the education system takes no allowance the fact that the first months of their life were spent fighting for their very existence, never mind trying to catch up with other children. It’s a blunt instrument.

All children are not the same. They develop and learn at their own pace. In fairness it’s virtually impossible to design a system which allows them all to thrive.

But they are trying. Everything I’ve seen about the school system since I’ve been a parent suggests it has travelled well along the route of compassion and fairness.

Things are unrecognisable since I started primary school in the 1970s when there were teachers who could barely contain their lust for the stick or slipper.

I was lucky in that I had enough academic ability to keep me from many of the worst excesses but I had several classmates who were ruthlessly beaten.

Looking back, I can see now that many of them clearly suffered from learning difficulties or massive emotional problems. Yet, no allowances were given and failure at academic tasks was met with the crudest forms of discipline.

And not all of the punishments were physical. One of my clearest memories of P1 is being punished for some supposed misdemeanour by being made to stand in the corner. I told the teacher I needed the toilet but she grimly refused to let me move.

I stood there for so long in pain that eventually I wet myself. In front of the whole class. A crueller way to treat a scared four-year-old would be difficult to imagine.

But it’s scarcely relevant to go over all this old stuff. The world’s a very different place.

But the fears remain.

I’ve got my son with me now. I’m inexpertly typing this with one hand while he holds the other, watching the TV.

I’m trying to keep a feeling of normality about the week while also explaining that things will be a bit different from tomorrow.

And that’s just it. It will all be a bit different from now on.

After today all the time I’ve got with him will always be before or after school, between terms or at weekends. The idea that it’s just me and him and mummy with nobody else to interfere will never quite exist in the same way again. The link that’s existed since his birth becomes inevitably diluted just a little. It will never be just us again.

And it’s the first step for him on that relentless path of life. From school to university to employment. The first inching turn of the groaning, grinding old wooden wheel.

The same relentless path which almost destroyed me.

And yet it has to be. I can’t rewrite the world and I’ve got no better ideas on how it could be done. He’ll make new friends, learn about the world. Learn how to live on his own. It’s the beginning of the biggest journey of all.

So why am I wasting my time writing? Maybe just because I feel a poignancy that I can’t shift today. Maybe because I think some of the other parents who’ve been in this position will know exactly what I’m going through.

He’s so happy sitting here beside me now that it feels like it could last forever. It can’t.

But I’m going to keep holding onto his hand for just a little bit longer.

2 thoughts on “Getting ready for school ”