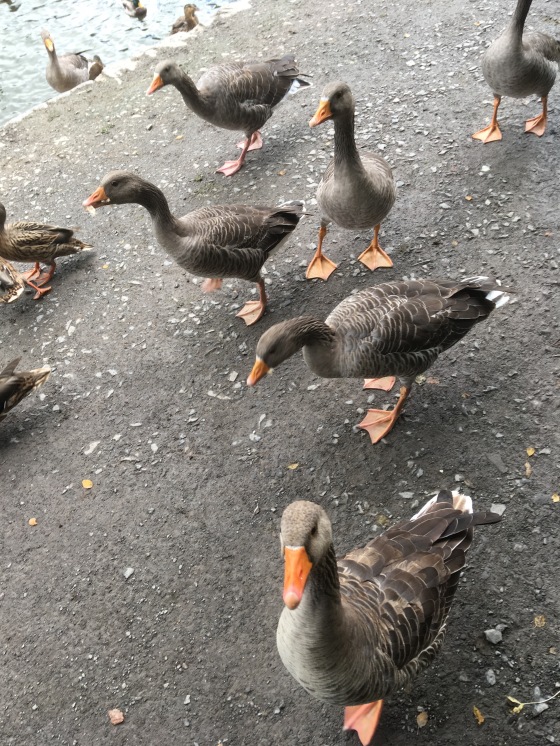 It’s been raining most of the day.

We’ve all been stuck in the house. It’s a bit claustrophobic. Tempers are a bit ragged.

There’s a break in the showers. We decide to go to Hillsborough Lake. To feed the ducks.

The ducks, swans and geese at the lake must be among the best fed in the world. It’s not unusual to see several groups of parents and their kids giving them leftover stale loafs.

And they can be picky.

I once baked a gluten-free superseed loaf. I couldn’t get any humans interested in it (it was rank to be honest).

I took it to the lake, broke it up and threw it to the ducks.

They poked at it with their bills before leaving it untouched, floating on the surface of the water.

Even the seagulls wouldn’t touch it and I’ve seen them peck at dog poo.

This evening there are few people but lots of feathers.

I start to break up a bit of bread for my son to throw into the lake.

But then I have a feeling that I’m being watched.

I turn and there’s a particularly bold goose right at my feet. This alarms me a little. Geese can be notoriously crabid and can give you a nasty peck.

My son is so alarmed he jumps into mummy’s arms. I’d like to do that too but don’t think it sends out a positive paternal message.

I try to shoo him away but he’s unmoved. His eyes are like little specks of black glass, his feathers grey and black, his thin bill orange.

I take a step back. He follows. He’s got his eye on the bread.

I throw a bit at his webbed feet. He gobbles it up and looks straight back at me.

I think about the situation. I throw a piece of bread behind him, trying to create some distance.

He gobbles it up and returns to my feet.

But now all the other geese in the lake have observed what is happening and start to waddle towards me.

Where there was one goose, now there are a score. They surround me. Their shiny little eyes fixed on the bread.

Now I’m more than a little afraid. I don’t particularly fear death but being pecked to death by a herd of hungry geese….well, it’s no way to go.

It reminds me of a scene from a horror film. I just can’t think which one.

I can hear myself saying ‘Nice geese, there’s a good goose.’

It crosses my mind to run but I have an idea of how absurd it will look if they start to chase me.

Or, even worse, if they start to fly after me.

Then, the bread runs out.

I hold my hands up.

I think I might actually have said out  loud, ‘I’m sorry.’

The goose which is closest to me stops. Geese don’t have shoulders but he makes his equivalent of a shrugging gesture.

He turns. All the other geese turn. They waddle back to the pond.

I stand there. I look around to see if anyone is watching. I roll my neck and flex my shoulders, some sort of masculine gesture of strength.

I find my wife and son. He’s jumping in the puddles left by the showers.

‘Are you ok, you look a little pale?’

I brush away the question with a little show of frustration.

Mummy shakes her head. We watch my son.

The murky brown puddle water is being splashed right over the top of his wellies and onto his trousers.

But he’s having so much fun we just let him be.

He sends the filthy water cascading in all directions.

After a while it begins to drizzle again. Then the rain becomes heavier.

We retreat back towards the car.

We all hold hands.

Sometimes you just need to get out of the house.

2 thoughts on “Video: Geese and singing in the rain”