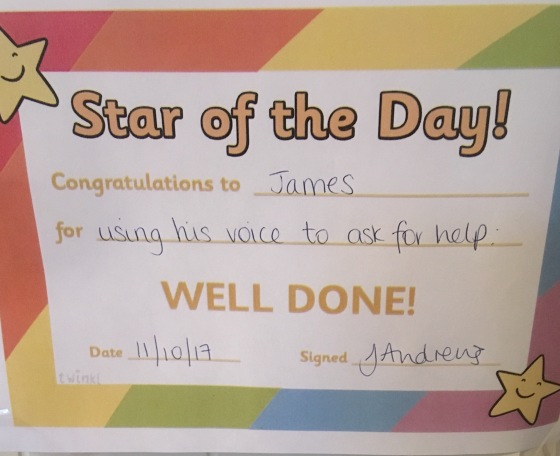 Sometimes it doesn’t take very much to change an unremarkable day into something more meaningful.

Just a little bit of effort. Remembering to remember that every action, no matter how insignificant, is significant.

We’re late out of bed. Again. My son says he wants to watch TV. I tell him there isn’t time. We argue about it. I turn the TV on.

I have to make his lunch. I’m searching through his schoolbag. I decide I should probably check if there are any notes or messages sent home from teacher (I know I should have done this last night, but you know how it is).

Between the books I find a sheet of paper which changes everything.

It says that my son was awarded the class accolade ‘Star of the Day’ yesterday.

It’s there in his bag. He’s forgotten to tell us about it. Forgotten it happened.

The certificate says he’s got the award for ‘using his voice to ask for help’.

It’s worth making a fuss over. It’s the first time we’ve ever received anything from school that we can use to make him feel good about himself.

I call mummy down and we start to express our wonderment and admiration.

He begins to get excited. He wants the certificate pinned up on the fridge and keeps sneaking in to have a look at it. He asks me if I can make up a ‘Star of the Day’ song. He tells us proudly all about the dedication and sacrifices needed to be Star of the Day.

He couldn’t have been anymore pleased if he’d won the Best Actor Oscar, the Nobel Peace Prize, a Pulitzer and the cuddly toy off The Generation Game on the same day.

And we couldn’t be any prouder parents.

It’s a lovely little thing for the teacher to do and, undoubtedly, all the kids will have their day of glory.

But there’s something quite perceptive about it as well.

I know my little boy is very shy. It’s probably my main worry about him going to school.

The fear that he’ll come up against a problem and not have the courage to ask for help to get through it. That he’ll just sit there miserably suffering in silence while the rest of the class leave him behind.

Obviously the teacher has spotted this tendency. She’s been gently encouraging him to find his voice. Helping him along the way.

It’s a big hop for him to put his hand up and ask for help. It would be the same courage I would need to go for a job interview or to sing live in front of an audience.

But he did it. And the reward he got for it will help him to do it again. And from such little pips does a strong fruit tree grow.

It’s also a valuable little window into what goes on in the classroom. That mysterious environment where secrets are not shared, confidences kept within the circle.

Every day I ask my son what happened at school. It’s always a shrug of the shoulders and the curt response ‘nothing’.

I’ve spoken to the other parents. It’s the same for them. We have a shared WhatsApp conversation where we mostly spend our time trying to guess what goes on when the door closes.

The Star of the Day fuss made us a few minutes later than usual. But it was worth it. He talked about his certificate excitedly all the way into the playground. He kept asking us, ‘It’s really good to be Star of the Day, isn’t it?’

When I come home again I find myself going straight into the kitchen to have another wee look at his certificate. Silly daddy.

But the phrase ‘using his voice to ask for help’ pricks something in me. It keeps coming back to my mind until I know I have to sit down and write about it. That’s how most of my posts start, with an emotion rather than a thought. I usually don’t know what I’m going to say until I start to type.

Using your voice to ask for help.

It’s so simple. But so difficult. And so central to everything we do in life.

We all need to be able to ask for help.

I’m forced to think about my own difficulties in being able to ask for help. The times when I’ve just struggled on by myself. In misery.

This must be one of the most important things we can teach our children. To use their voice to ask for help.

But it’s not just for kids. I’m trying to do a lot of new things in life. The truth is I sometimes need help. And I need to find the courage to ask for it.

If my son can do it then so can I. He’s the inspiration behind everything I do.

And to bring me back to where I started the unremarkable has now been changed into something meaningful.

My son feels good about himself.

We all deserve to be Star of the Day sometimes.