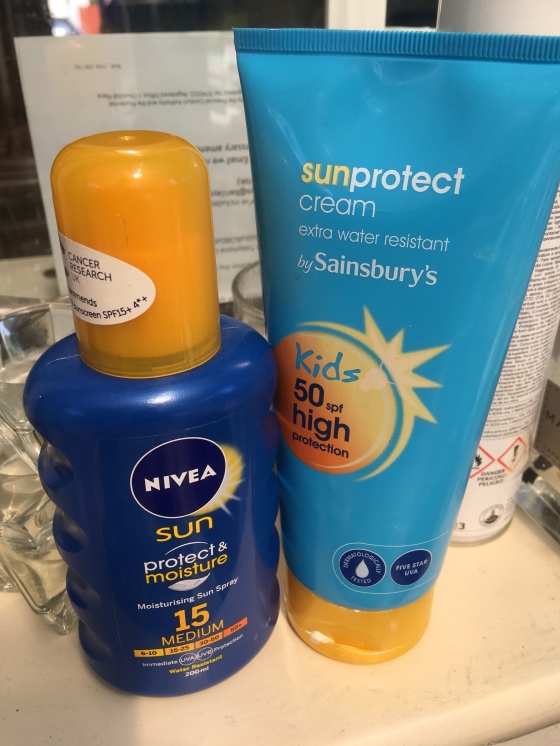 The sun knows no mercy.

I’m holding my son fast between my legs in a way I’ve seen farmers do with sheep they are about to shear. One of my hands is pinning his arms while the other is vainly trying to flick the lid off a plastic bottle.

My boy is squirming wildly, like a desperate young trout in a net.

‘Come on buddy, I need to get the cream on you.’

‘I know you don’t son but it’s really important.’ I look into his eyes and put on my kindly, responsible father voice. ‘If I don’t let me do this you’ll get burnt and it will be really, really sore.’

He softens a little. I use the distraction to quickly move the bottle towards him and push down the button. At first nothing happens. I push it again with the same result. I reposition my arm and start pushing the button over and over. My son lifts his head to see what is happening. I’m pumping the button desperately until, when I’m just about to give up, a violent spray of sickly white liquid erupts from the nozzle and goes right into his face, and his open eyes.

He begins to scream like the demon in The Excorcist film when she’s been sprayed with holy water.

Welcome to the summer.

Acceptable parental standards have changed out of all recognition since I was a kid. This is evident in many areas of society. Corporal punishment is an obvious one, as is smoking near a child. The balance of consideration has shifted irreversibly towards juvenile welfare and we’re all better for it.

Another area which has shifted is attitudes towards exposure to the sun and a greater awareness of the dangers of it. I think it’s fair to say this simply was not on the agenda when I was running around the fields in north Antrim in the 1970s. I assume the link between sun and skin cancer was known then but it hadn’t culturally penetrated everyday life, just like the link between lung cancer and smoking was known decades before cigarettes were banned from buildings.

On one hot day every summer, when I was a youth, we’d head to the beach. I’d run around in the water and lie on the warm sand, enjoying the heat of the glass-like particles against my back. And then I’d suffer miserably for it later. Sunburn was just a thing to be endured, I don’t recall that it ever entered our heads that you could do anything to prevent it. Blistered and peeling skin was as routine as getting a cold, just something to put up with and get out of the way.

I remember my brother and I used to play a game where we’d see who could rip the biggest patch of whole skin off our boiling red backs.

As I said, it was a different time.

I’m a bit wiser now, but still prone to accident. I have remarkably pale skin, likely to burn if I walk too close to a toaster. I’ve never tanned, rather my skin knows only two shades – pallid white or lobster red. Sometimes with a dry, peeling patchwork to complete the effect.

Unfortunately I’ve been burnt countless times and I know that the pain of really bad exposure is indescribable. On one unfortunate occasion I spent a day driving a dumper truck in scorching summer weather. As the sun rose to its highest point I applied sun cream, but forgot to cover the backs of my ears. I sat there on the dumper for hours, oblivious as my ears baked in unforgiving heat. I knew something was wrong that night when the terrible pain began to take hold. But the full horror was only revealed the next morning when I woke up to find that my ears had swollen hideously, giving my face a ghastly elephantine quality. I’m not particularly vain but I did have a nervous couple of days while I waited and wondered if my ears would ever return to normal. Eventually they did.

Now, I try to be more vigilant with protecting my skin but I still make mistakes. On holidays abroad I put high factor sunblock on but often miss a spot which means when the sun disappears and I go out at night there’ll often be a bright red streak somewhere on my arms or legs, as if I’ve been branded. Once, on holiday in Tenerife, as I lay by the pool, I had to pretend to be asleep every day when the hotel’s ‘tanning expert’ walked past to avoid getting a lecture.

I know the importance of putting on sun cream but I just don’t like the physical act of doing it. I hate the sliminess of the whole process, the nauseating coconut smell and the fact that scores of dead insects immediately glue themselves to my sticky limbs, as if I’m a human fly trap. It’s like preparing yourself to leave the house but then smearing custard all over your arms and legs before you do it. From the moment I put it on I can’t wait to wash it off.

My son has inherited my pale skin and I’m ever on my guard to ensure that he doesn’t make the mistakes I have. We’ve been enjoying a period of unusually dry and sunny weather and he wants to make the most of it. It’s cruel not to let him get outdoors as much as possible which means I’m constantly chasing after him with the factor 50.

Often I get more of the wretched milky liquid on his clothes than his skin and sometimes I lather it so thick on his face that he looks like a boxer getting ready for battle with Vaseline smothered eyebrows, but at least I know I’m doing all I can to protect him from sun exposure.

As long as I don’t blind him with the sun cream in the meantime we’ll be just fine.