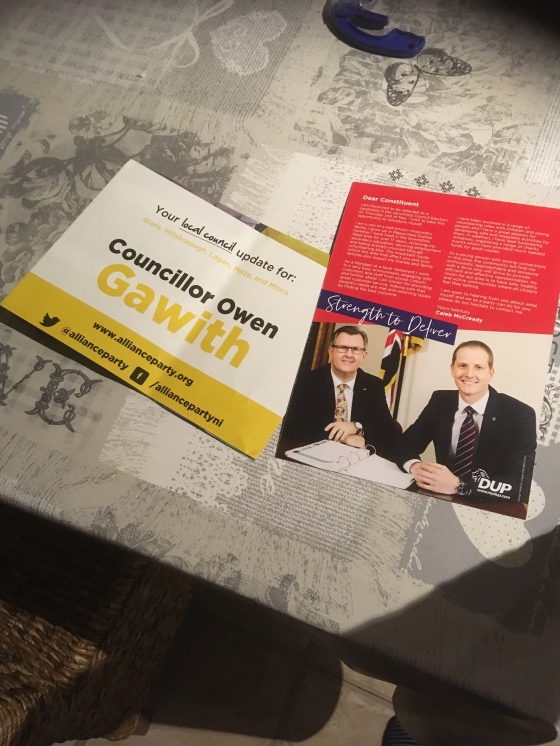 It’s early evening. Mummy is upstairs putting our son to bed and I’m having some precious relaxation time. I’m sprawled on the sofa, balancing an extra large bag of chocolate raisins on my stomach while watching re-runs of the masterful political satire The Thick Of It.

Then I hear the crunch of footsteps on the ground outside our front window, just behind where I’m lying. I freeze, a chocolate raisin pinched between two fingers just an inch from my open mouth. I live in a semi-detached home with a little front garden. The only people who walk directly past my front window are postmen or people delivering unwanted junk leaflets; in other words those taking a short cut between my next door neighbour’s front door and mine.

I hear the sound of an object being roughly shoved through my letterbox and then footsteps walking away. I relax.

Later I’m roused from my stupor by the need to carry out a task (fetching another bag of chocolate raisins) and decide to check what junk literature has penetrated my front door. It’s a political leaflet, introducing me to my local DUP candidate for the forthcoming local government elections. There are photos of a young man on both sides of the leaflet. In one he is sitting beside MP Sir Jeffrey Donaldson. The young candidate is wearing a tortured, forced smile. The sort of smile that is familiar to me every time I pose for a photo.

‘No, I mean a natural smile, like you’d do in real life.’

‘This is natural, this is how I smile.’

I read the leaflet. It is light on relevant detail, containing not a single word on policy or proposal. In fact, reading over the text the only thing I can ascertain that the DUP seems to be in favour of is the incorrect use of punctuation.

The following day another leaflet arrives, garish yellow, the colour of The Alliance Party. This one is presented as ‘Your local council update’ from a sitting Alliance councillor, although I’ve no recollection of receiving any previous such updates from him.

This leaflet is heavier on detail. There’s a photo of the councillor picking up litter, and another of him putting bottles into a recycling bank. All very worthy. Disturbingly there’s also a photo of a mucky red bin with a sign which reads ‘Clean it up! No litter please’ next to the image of a headless dog. I’m often annoyed by dog fouling but cannot support the decapitation of innocent animals as a deterrent.

I put the Alliance leaflet on the windowsill in the kitchen next to the DUP one. I’ll keep all the leaflets I receive together and take them out nearer to election day to have a proper read.

I expect to get lots of leaflets. But I’m less confident that I’ll get many, few or any knocks on my door.

I make this point because I’ve long noticed an inconsistency in local politics. In many years of covering elections as a journalist I’ve never yet met a candidate who didn’t tell me that they have ‘knocked on thousands of doors’. Indeed most answers to media questions at election time are prefaced by ‘Well, what we’re hearing on the doorsteps is….’

But despite this nobody knocks on my door. Indeed in more than a quarter of a century of being eligible to vote, and having lived at a variety of addresses, I’ve only ever had my door knocked by a political canvasser once.

This was a young woman who told me she was canvassing on behalf of then Ulster Unionist MLA Basil McCrea. I asked her a question which she met with a frown and a puzzled expression. She then told me she would have to find Basil, who was in another street, ask him and then come back to my door with the answer. She never returned. I desperately hope she is still not wandering the streets looking for Basil in the mistaken belief that he’s still an MLA.

Some of my friends have told me that their door has never been knocked while for others it is a rarity. But it does happen. One former colleague informed me that he opened his door on one occasion to find a well known Sinn Fein MLA on his step.

‘Are there any Sinn Fein voters in the house?’ the politician asked.

On being told that there were none, the politician thanked him politely and left.

Which started me thinking on the pointlessness of the encounter. Presumably the value of a political doorstep, if there is any, is to attempt to persuade or change minds, not to reassure yourself with those who are already converted to the argument? Are there any Sinn Fein voters in the house should really be the closing gambit, rather than the opening. And what did he intend to do if he found Sinn Fein voters there? Engage in a communal, self-congratulatory hug?

I know another family who invited a UKIP candidate into their home for a cup of tea and some Rich Tea biscuits. They are strongly pro-European but felt desperately sorry for the unfortunate candidate who told them he had spent the day being verbally abused and chased from front doors.

Which hints at how traumatic the experience can be for those carrying out the knocking. I was acquainted with one political candidate who told me he lived in fear of rapping doors at a previous election lest he got asked a question he didn’t know the answer to.

On one such occasion he was quizzed by a grumpy householder ‘What’s your policy on people breaking into homes?’

After some moments of flustered incoherent mumbling he finally responded ‘Uh, well, we’re against that.’

I suspect (completely without proof) that most politicians, like people in general, take the easier route more often than not. Stick the leaflet through the door and move on to the next house. It’s just less painful for all. Perhaps just knock on the doors where you know you’re going to get a good reception.

After all I really believe that caught off guard at my front door, wearing my Superman pyjamas, is not when I’m likely to engage in my best political discourse. Rather, I’m so socially awkward and eager to avoid confrontation that I’m likely to agree to any old nonsense just to get them to go away.

‘We’re strongly in favour of the compulsory force-feeding of Ready Brek to fishermen and the nationalisation of geese.’

Probably the very act of writing this blog ensures that my door will be knocked repeatedly by politicians between now and election day. Perhaps I should desist.

2 thoughts on “The thin of it (politics)”