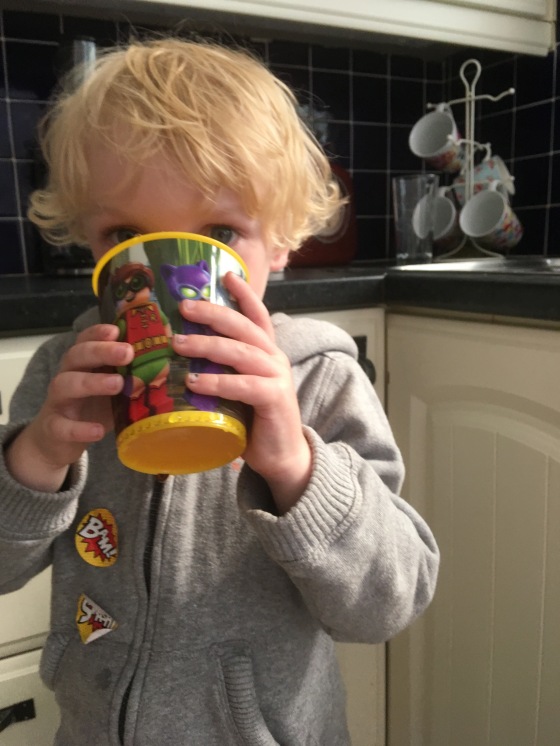 The father stirs as he is roughly shaken in the bed. A moment of panic before he sees the boy there.
‘Uh? Are you alright son? Jesus, what time is it?’
‘I’m thirsty daddy.’
‘What? Oh right. There’s a cup at the side of your bed.’
‘It’s all done. I’m thirsty daddy.’
‘Right hang on.’
He hauls himself upright away from the warmth, his eyes still more closed than open. As he trudges down the stairs in the dark he clatters his big toe on the corner of the bannister.
‘Jesus wept!’
He limps into the kitchen, finds the closest vessel and turns on the tap. He turns it too far and the water comes out in an angry rush and splashes his hand. He doesn’t even bother to dry himself before he climbs the stairs again. The boy is standing in the dark, small, alone and miserable. The father ruffles his son’s hair.
‘Here you are son.’
‘I don’t want water daddy, I want juice.’
‘Can you not just take water this time?’
The boy’s lower lip starts to tremble. His dad softens.
‘Hang on son, just a second.’
He descends the stairs a second time. He finds a bottle of cordial and adds a dash to the cup, the thicker purple liquid invading the water like an oil spill in the ocean. He retraces his steps. The boy is weeping silently in the dark.
‘Here you are son. Some juice.’
‘I don’t like blackcurrant juice daddy, I want orange.’
‘What? You love blackcurrant? You said it was your favourite yesterday.’
The boy’s sobs deepen.
‘I’m thirsty daddy.’
The father looks around, as if seeking intervention.
‘Right hang on son, I’ll get it for you.’
He descends the stairs a third time. This time he has to turn the lights on in the kitchen as he hurls the blackcurrant juice down the sink and searches in a low cupboard for the orange. A bottle of sauce falls onto the floor, spilling its contents. He roughly wipes it up with some kitchen roll, muttering under his breath.
As he climbs the stairs he knows from experience he won’t be able to sleep again tonight. He enters the bedroom with the orange juice. For a moment he can’t see his son. Then he does.
The boy is asleep in his father’s spot in the bed, nestled into the warmth of mummy’s back. The boy has a contented smile on his face.