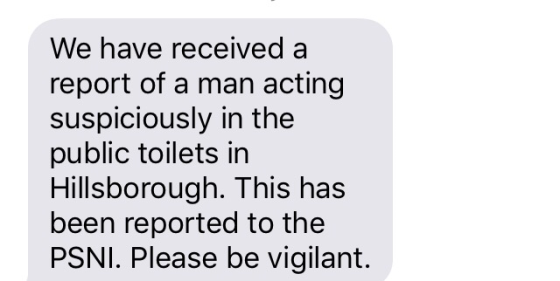 I received a text message from my son’s school today.

It warned about a man ‘acting suspiciously’ in the public toilets.

It took me a few minutes to register exactly what was happening.

First there was a jolt over the fact I’d got a text message (a rare enough occurrence).

Then there was the surprise that I was receiving a text from the school (I had no idea this was how they imparted information).

This then led to a moment of concern and indignation where I thought this was a personal rather than a generic message. For a terrible illogical moment I thought the text was about me, rather than for me.

But then the shilling descended. It was a warning to all parents to be vigilant due to a report of suspicious behaviour.

I was unsure exactly how to react to this. Of course a parent’s natural concern for the safety of their child trumps all other considerations.

But I also found myself curious for more information.

Acting suspiciously seemed to be such a vague phrase as to be almost meaningless.

And of course the thought occurs that this might be an overreaction, fuelled by illogical fears which magnify a risk greater than it ever needs to be.

I have to trust the judgement of the school which decided this was serious enough to raise the alarm.

I suppose if there’s any concern at all then parents have the right to be informed. And a school seems to be the best channel to pass on information to a large number of parents.

The last line of the message said ‘Please be vigilant’. I’m not sure I know any other way.