Exhaustion is seeping from my limbs like slurry leaking from a tank.

Mummy’s away in London with work today so I’ve had full parental control.

We’re in bed, covers pulled up tight to our chins. I’m probably closer to sleep than him. He’s still talking, incessantly asking questions. Always the questions. He keeps looking over to see if my eyes are still open. They are, just.

Eventually he settles, slowing down like the toy from last Christmas. His little body begins to unwind and soften.

He’s been silent for a while so I assume he’s gone. But then.

‘Daddy?’ his voice heavy and slow with the immediacy of sleep.

‘What will we dream about tonight daddy?’

It’s a ritual of his. Usually the last question of the day before he rests. Some infantile notion that his dreams can be controlled. That our stories are of our own choosing. It gives him some comfort I suppose.

I’m spent. I don’t have much more creativity to give. I force myself to think of something.

‘Why don’t we dream that we’re two planes racing high up in the sky,’ I whisper.

There’s a short silence, as if he’s pondering the notion. I have the familiar feeling of being judged. His answer is barely audible.

And then he’s gone. His eyes have become dark rings. Sometimes he emits soft groans, sometimes he grinds his teeth. His mouth slightly open, yellow skin. The slightest discolouration where the vein runs along the temple. I run the back of my hand along his face, old skin against young. Rough touching smooth.

Despite my extreme state of tiredness I don’t feel that I can sleep just now. I try to read a book but the words on the page seem stale, without meaning. I put it down and just lie there. Watching him.

There’s some animation in my son beside me. He turns often in his sleep. Sometimes he reaches for me with his hand or foot, just to check I’m still there. There’s the occasional strangled giggle or whine. Light snores. I know that something’s going on in his brain and I’d love to be able to read him now. It occurs to me that this sums up parenting, trying to understand what’s going on in their heads.

Within him some sort of disparate narrative is probably being pulled together as a dream. Something which makes sense to only him, and even then only at this moment. He most likely won’t remember it in the morning. It’s probably already gone forever. Dreams can’t be captured like butterflies.

He talks often about dreams, the fleeting bits and scraps he remembers. The ideas that fill his head through the day. He often gives us a small glimpse of the scope of his imagination. The ideas, conundrums, concerns, questions, concepts. He talks about the future too,

This week he asked us ‘When I’m a daddy, who will be the mummy?’

He’s chosen his career already. He says he wants to be a doctor and a scientist. It’s noble and serious. Maybe he will. Maybe he’ll change his mind dozens of times before he gets to where he needs to be.

But my mind is tired from wondering and wandering. I settle down, letting the first stages of sleep caress me.

It’s been years since I’ve remembered any of my dreams. Perhaps my mind just doesn’t work that way anymore. I get little hints occasionally, a teasing feeling or emotion, but I can never put the mirror back together.

My brain feels worn, broken down, empty. I suppose there was a time when I had the energy to grow ideas and to order them.

Now I just watch my son. When he sleeps. When he watches the TV, chewing slowly on a biscuit. When he’s with his friends, his face flushed with joy. I’m content that he is the realisation of my ambitions. The stick that all of my dreams would be measured against.

We both sleep well.

The morning is welcome and everything seems to work. Mummy is back home and my son is excitedly telling her all his adventures from the day before. The games, the dancing, the dream about the two planes racing high up in the sky.

It’s a school day which brings its own feeling of urgency, a sense that things have to be done. But it’s also Friday and the sweetness of the weekend and the time together is close, reflecting onto all of us.

I hurriedly get my son into his uniform and coat and he doesn’t really bother to complain. I brush his hair and clean his face. I take him outside, it’s definitely winter but the weather seems more benign this morning.

I’m fiddling with the straps of the car seat when he lets out an excited yell.

‘Look daddy! Look in the sky!’

I gaze upwards. There’s a flinty blue sky and the beginning of a sunrise over the roofs of the distant houses, just a promise at this hour.

And above, two clear lines cut across the sky like the silvery trails of flat slugs. They are parallel, even, moving away. The aircraft appear tinier than toys.

My son is jumping up and down.

I lift my son into his chair, taking a few seconds to check the straps. He’s still straining his neck to watch the distant planes. It all seems to make sense to him now.

I warm the car and slowly reverse it down the driveway. But he’s still not ready to let it go.

‘You see daddy, I told you, dreams do come true.’ 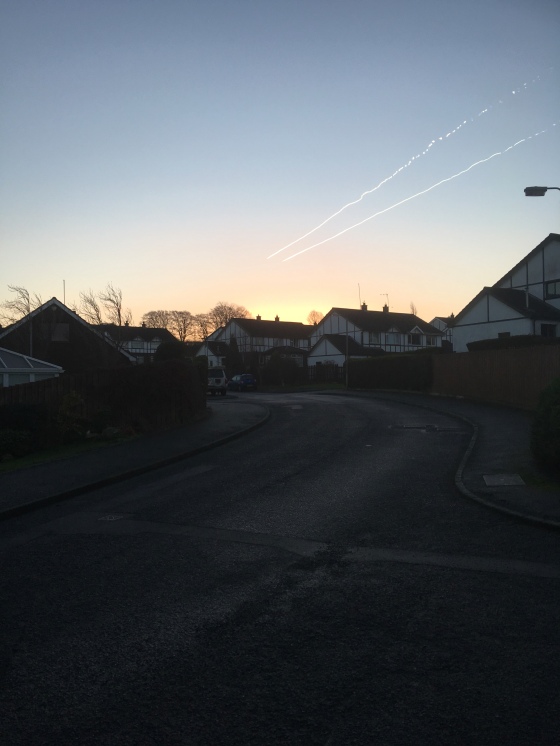 4 thoughts on “When dreams come true”