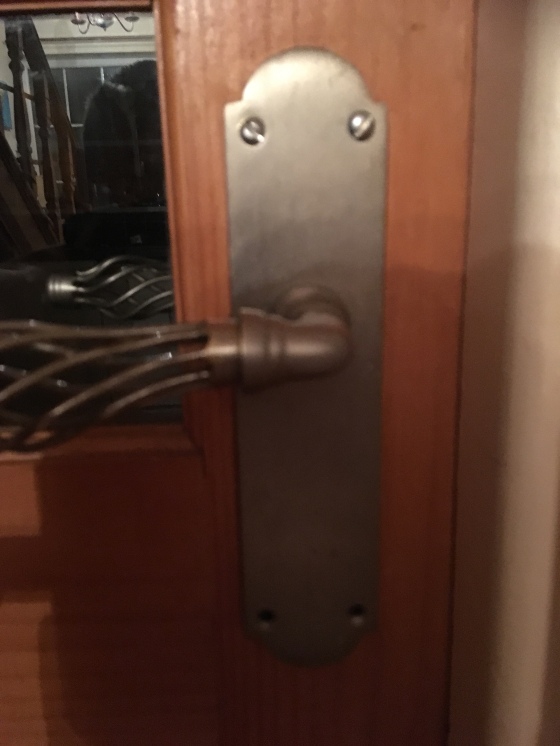 The alarm sounds before 6am. A repellent, electronic noise.

The first thing that invades my brain is the sheer thudding normality of the day.

Get up, make breakfast, prepare my son’s school lunch, shower, dress, drive to the city, have coffee, go to work, pick up son from school, make dinner, spend the rest of the day getting jumped upon.

I stumble through the dark and, yawning and scratching, slowly descend the stairs. I turn the kitchen door handle.

I turn it again. This time I push as well.

I’m still somewhere in the grey land so it takes me a moment to condense the happenings into an order my brain can understand. I’m turning the door handle. The door is not opening. That’s not right.

I stand there. In the dark.

Some time later I decide I’m going to have to do something.

I turn on the hallway light and crouch down, squinting against the glare of the bulb. The handle is moving but not opening the latch of the door. Something has clearly broken within the mechanism.

I look around. I consider calling the guy who used to live next door. You know, the guy who is handy.

I walk into the living room and look out of the window. The lights are on in the house across the road. Then I walk back to the kitchen door and try the handle again.

It’s still not working. My diversionary tactic has failed.

I’m going to have to come up with something better.

There are multiple problems to be overcome.

I usually have to end up phoning my da when I’m trying to assemble the toy out of a Kinder Surprise egg.

But this brings me to the second problem. My tools are in the kitchen.

The reality is closing around me, like trying on the nice shirt that fitted me last summer.

It seems clear that the door handle will have to be removed. Without tools.

The only other options are

• to break down the door (great expense, more DIY problems further down the line and the humiliating prospect that I won’t be able to do it),

• to smash the glass in the door and reach through (probability of me snicking a vital vein or artery),

• to go outside and then try to get in to the kitchen through an exterior window (see previous),

• to just go back to bed (attractive, but ultimately not productive).

I examine the handle with proper concentration, forcing myself to think. It’s held in place by four small screws.

Which are all in the kitchen.

I look around for something I can use as an alternative screwdriver. All of my keys are too thick to fit inside the tiny, narrow ridge.

I try a couple of my son’s more robust plastic toys. Nothing can be made to fit.

I wonder if a coin might work. I look around for my wallet.

I spot it. Through the glass in the door.

I try using one of my fingernails. I quickly regret it.

Then I’m up the stairs. Searching in the little bathroom cabinet, in my wife’s make-up bag.

I descend triumphantly moments later with a small silver pair of nail scissors.

I begin to work at the screws of the kitchen door handle. After a few moments one of them starts to move. Just a little at first, but definite movement.

A little tremble of excitement and pleasure runs through me. I feel like Clint Eastwood in Escape from Alcatraz.

I begin to wonder how easy it would be to make a model of my own head from leftover bars of soap.

I force my mind to come back to reality, chastising myself for feeble concentration.

Soon I have loosened one of the screws enough that I can remove it with my fingers. I hold it in front of my face, gazing upon it like a long-lost archaeological wonder.

I set it aside and begin to work on the other screws.

They stubbornly refuse to budge. I spend several minutes heaving and scraping and sighing but nothing happens. I’m conscious that my wife and son are asleep upstairs. At first I’m careful  to ensure that I don’t make any noise which might wake them. But soon I’m rattling around, deliberately trying to amplify every sound  to ensure it disturbs them so they know what I’m going through. My struggle.

Soon I have to admit that this isn’t going to work. The first screw must have been already loose. I haven’t been able to shift any of the others even a micro-millimetre.

I study the nail scissors. The little blades are slightly curved at their ends. The reason for this design eludes me but it seems to be the main factor in my failure to shift the screws.

I go back upstairs to the bathroom. Now I’m on my knees in the white cabinet beneath the sink. Right at the back, pulling out items not seen by civilised eyes in years. I find two more pairs of nail scissors – rusty, dusty and resting happily in retirement. One has curved blades. The other is straight.

I go back towards the kitchen door handle thrice armed with nail scissors.

But the length of the process is disturbing me now. I already know that my favoured pattern for the day has been fatally compromised.

Because of my past experiences I prefer to work limited hours nowadays. Just enough to get a little bit of money while still keeping a decent balance in my life. It means I still have enough time to do the really important job, looking after my son.

Thus a few mornings a week I go to do some work in a little office, writing for a magazine. I’m always careful to ensure that I’m finished by lunchtime so I can be away in time to pick my son up at the school gates.

And this is what is troubling me.

I order my ‘working’ day in a certain way. I like to rise early. I drive to Belfast before rush hour because I can’t bear heavy traffic.

Then I spend an hour in a little coffee shop reading the paper, thinking and scratching down notes and ideas. It’s my little treat to myself while the rest of the world wakes up.

I don’t even like the coffee and I resent having to pay £2.70 for it. I just like the environment and the peace.

Last week I asked the staff if I could just have a glass of tap water to sit in.

Now, today, I know I’m not going to make it to the coffee shop for my quiet time. And I’ll have to endure rush hour traffic, and be late for work, and struggle through the rest of the remaining hours to catch up to make sure I get to school on time. It’s an unpleasant prospect.

So I take the straight-bladed scissors and begin to work at another of the tiny screws. It’s a laborious and frustrating process but eventually it begins to give just a little. I have to keep readjusting the position of the scissors and of my body to get it to move a tiny, almost imperceptible amount.

The process seems interminable. The dark has given way to light before I’ve finally managed to extract all of the screws and remove the exterior of the door handle.

Now I can hear that my son is awake and moving around in the bedroom above me. Mummy is grudgingly getting ready to face the day also. I need to get this door open so they can have their breakfast.

Removing the handle has exposed a long, ugly strip of black four-sided metal.

This bolt controls the mechanism which allows the door to open. All I have to do is get it to turn.

I try to turn it, struggling to get a grip on the metal with my fingers.

I wrap a pair of my son’s pyjama trousers, which I find lying about, around the bolt and try again to manoeuvre it anti-clockwise. Without success.

I consider pulling the bolt out of the door. But in my mind, admittedly a confused and often misguided place, this seems to be the wrong step. The bolt is the link with the other side of the door handle and to break that link would undoubtedly be fatal. Finding a method to get the door to open without the bolt in the handle would prove to be as difficult and elusive as the search for a north west passage through America to unlock the trade routes to Asia.

Now mummy and my son have descended the stairs. He wants his breakfast. She gives me a half-confused, half-accusatory stare.

I take some time to explain the process, my struggle, to her. I tell her about the options, the search for suitable tools, the different types of nail scissors, the tortuous process of removing the screws.

She nods along. Then, when I’ve finshed she says…

‘So did the handle just come off in your hand then?’

I take a voluminous inhalation.

Then I crouch down at the handle to attempt to explain the process again to my wife. To illustrate and demonstrate the very futility of it all. She bends over my shoulder.

I do love a grand dramatic gesture.

So while telling the story I throw my arms in the air to display my erupting agitation.

And I catch my wife full in the face with my blind swinging hand.

She reels away, covering her wounded head with her arms. I race after her, mumbling apologies.

I have two thoughts.

2 She seems to be milking it a bit.

I express one thought at the moment. The other I keep to myself.

When she recovers her grace mummy takes her turn in examining the door handle. I move close behind her. My previous clueless flapping around has now been replaced by a fierce determination that I’m the world’s greatest expert at replacing kitchen door handles.

She suggests pulling the bolt out of the door.

I shake my head and exhale air through my teeth at the innocence of the suggestion.

I tell her about breaking the link with the other side of the handle.

I also tell her about the search for the northwest passage through America but she seems to have stopped listening.

Then she speaks. She says that if the only other option is to break down the door, then surely our situation cannot be further injured by removing the bolt.

I think about this. The logic seems flawless. Annoyingly.

I reach down and slowly pull the bolt out of what remains of the door handle. I examine it and then slide it back into the hole.

And the door opens without difficulty.

I nod my head. Sagely.

‘Just as I thought,’ I mumble.

I stumble, blinking, into the kitchen. I sink to my knees and hold my arms in the air, a pose perhaps inspired by Tim Robbins when he finally escapes from Shawshank Penitentiary.

Then my wife says.

‘Can you get your son’s Coco Pops? And iron his school jumper while you’re at it?’