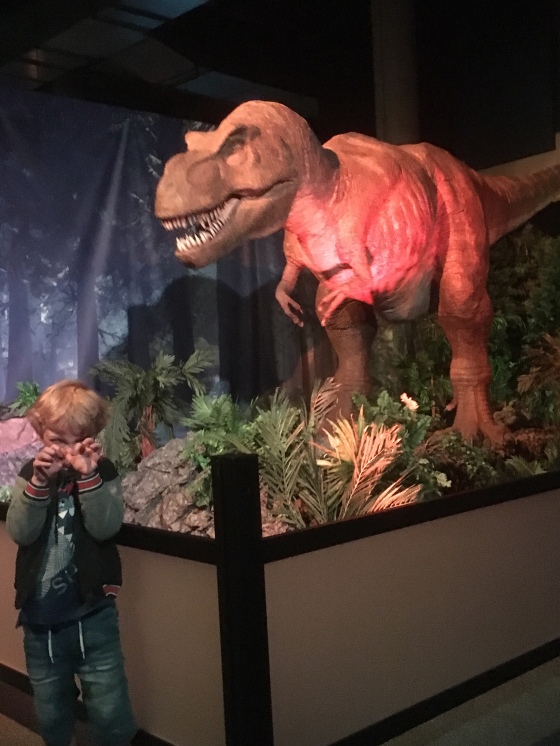 It’s the weekend and mummy is working. The rain falls steadily in the morning and the empty hours stretch long in front of me. I’m going to need a diversion.

A friend suggested the new dinosaur exhibition at W5 and I’ve got no better ideas. My son is fascinated by anything prehistoric, and it seems like a good fit.

But when I introduce the plan he’s surprisingly hesitant. His enthusiasm for a visit to W5 is tempered slightly by a fleck of fear about coming face to face with giant monsters. I assume he’ll come round and we set off.

But we’re barely through the doors when I’m forced to realise we might have a problem. The woman at reception talked a lot about the dinosaurs on floor four and he’s spooked. He wants assurance that he won’t have to go near them.

I know something about living with fear so I give this the attention it deserves. I make him look into my eyes and promise him that he won’t have to do anything he doesn’t want to. I tell him we’ll take a look at the dinosaurs later but to forget about them for now. We’ll go to the play areas first. Some things are best approached from the shallow end.

We play for a long time. We’re rock stars, cafe workers, shopkeepers, builders, doctors, train drivers, sailors, racing drivers, mechanics, doctors, crane drivers and scientists. I try to maintain the educational theme but my attempts to explain the levitation experiment are rather undermined when the inflatable fish drops onto on my head.

The sun has broken through as we have lunch in a beautiful spot overlooking the Lagan, but it’s not long before the dinosaurs cast their shadow once more. My son keeps asking about them, but then reiterating that he doesn’t want to go. I can tell he’s both fascinated and terrified, torn by the different emotions which he cannot control.

His little body stiffens and his pace slows as we head towards the exhibition room on the fourth floor. From the corridor outside we can hear mechanical roars and my son becomes upset so I have to lift him into my arms. One short glance into the dark room is enough to push him closer to terror and tears.

I have to retreat to a quieter, brighter spot where I talk gently, taking my time and telling him he doesn’t have to do anything he doesn’t want to. I can tell he’s on the verge of a tantrum but he can’t take his eyes off the door, a desperate fascination to know what’s in there.

The easy thing now is to back away, to leave it well alone. Maybe that’s the right thing, I don’t want to do anything which adds to his distress. But I know my son, and I know that the bigger part of him wants to do this. I have to balance his raw fear against the regret he’ll feel if he misses out. It’s the conundrum of dealing with a sensitive child.

I tell him I’ll carry him and we’ll just stand at the door. The large room is dimly lit, dominated by huge, moving T-Rex and triceratops models, bright digital screens and echoing with dull, throaty roars.

We stand in the doorway for several more minutes. Eventually he peels his face off my neck and starts to ask questions. I take a few steps forward but quickly retreat as a roaring yellow-eyed T-Rex sends us back to square one. I keep reassuring him, we’ve come this far.

Soon I’m able to walk slowly through the exhibition as my son whispers the names of the various dinosaurs into my ear. The room doesn’t seem so dark now and the roars not so loud and aggressive, and he slips out of my arms, onto his feet. Now he’s leading me by the hand, standing closer to the models and studying their fierce expressions. Eventually he takes off, leaving me behind as he begins to race around the room.

Then he’s lost in a game of his own imagination, starring himself, Andy, a time-travelling clock and the dinosaurs. If I have a part in this performance, then it’s small and insignificant. An extra who stands at the back and doesn’t get involved.

He keeps running off, lost in his own sense of deepening joy, and making it increasingly difficult for me to watch him. As I search the dark corners I’m half expecting to see him on top of the T-Rex, astride it triumphantly like a modern-day Hannibal.

A few times I try to persuade him from the room but he won’t leave, he’s having too much fun. I tell him there are other things to play with but the Jurassic period is the only one which interests him now. Soon I’m yearning for an meteorite.

Eventually I drag him out and we play in the science room, but it’s merely filling time until he can go back to the dinosaurs. I tell him he can have one last play. As we get close to the door he takes off at speed, yelling ‘Dinosaurs, here I come!’

To bribe him into leaving quietly I offer to buy him a toy from the gift shop. He chooses the most fierce toy dinosaur in stock and emulates the roars and the savage expressions as we head back to the car.

He’s calm as we drive home, a little tired perhaps. At one point he reaches across and places his hand on my arm. We chat like grown-ups.

‘I had great fun today buddy.’

‘So did I daddy, it was brilliant.’

‘What was the best bit son?’

‘The dinosaurs were the best.’

‘The dinosaurs? Were they not a bit scary?’

‘No daddy, they’re not scary at all.’

2 thoughts on “Walking with dinosaurs”