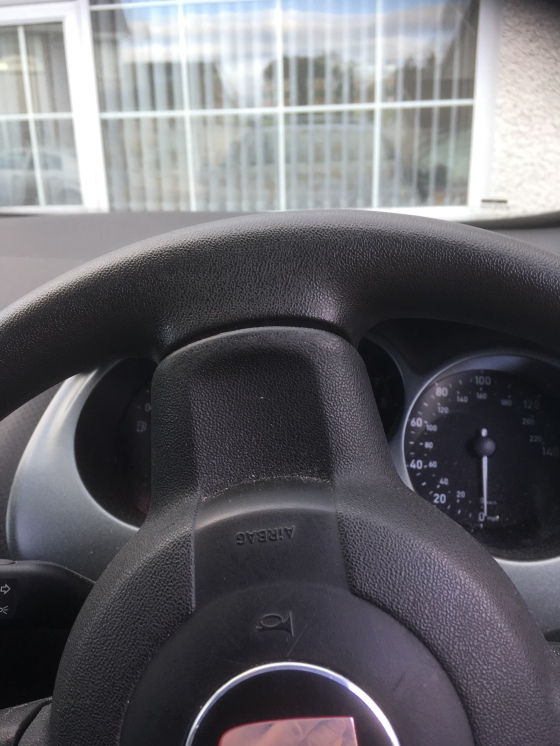 I drive a shitty old car.

It’s not my preferred state of affairs. If I found myself in a superior pecuniary state I would no doubt invest in a stretch Cadillac, painted bright pink with gold-plated wheel trims and my autograph emblazoned on the side panels in sparkling glitter.

But it is not so. Society has decried that the little contribution I make should be remunerated just about handsomely enough that I can keep my rusty old car on the road.

And that’s what I do. Just about.

But running a car is like raising a child, as the years pass the costs soar and the amount of co-operation you receive dwindles. That, and the occasional discovery of bits of old crisps in unexpected crevices of both.

My old motor has long since been paid off, it’s got north of 100,000 miles on the clock and, I suppose I’ll keep on driving it until one or other of us conks out.

I know nothing about the maintenance of cars so I pay £10 a month to the RAC. This, at least, gives me the security that when a mechanical malfunction occurs I can be both rescued and patronised by one of their tutting mechanics.

But lately the list of various parts of my car which have stopped working has grown too long to be ignored and I have been forced to book it into the dealer for repairs.

Now, I know that mechanically-minded readers may already be hyper-ventilating at the prospect – and the cost – of booking the car into the dealer.

When it comes to cars everyone has good advice about someone who can do it cheaper. A friend of a friend who will fix your car up in his back yard if you pass him 40 Benson and Hedges and a tin to Pedigree Chum for his pet Doberman.

But my logic is this. When I’m getting my car serviced or ready for MOT I try to find an independent garage who will do it for an amount less than the Greek national debt.

But now my car needs parts and it seems to make sense to bring it back to source. The people who actually have a link to those who make the car that I drive.

Plus I drive my son everywhere in my motor. I’d rather know that the parts are solid and reliable – and not ripped off a child’s discarded tricycle in the scrapyard.

So I find myself dialling the number of the dealer.

A woman answers on the third ring. She is friendly and forward. She tells me her name is Gwen and insists on calling me Mr McCambridge.

I tell her that I need some work done on my car. She asks me for the number plate. This rather catches me out and I have to put Gwen on hold while I scramble outside and scrawl the digits on the back of my hand. When I return and pass over the information I can hear an exhalation of breath at the other end of the line.

‘Your car is out of warranty Mr McCambridge,’ Gwen says.

I already know this.

The word warranty derives from the Anglo-Norman French word garantie, which was an ancient legal term denoting a covenant annexed to a conveyance of property, in which the vendor affirmed the security of the title.

I believe my car pre-dates even this usage.

I tell this to Gwen (well, excluding the bit about the origin of the word warranty).

She responds: ‘Well, in that case you’re liable for a charge of £80 an hour while our mechanics carry out the exploration and investigation phase on your car.’

I have mixed feelings about this. On one hand I’m already beginning to sense I’ve made a mistake and am about to overstretch myself financially. On the other I quite like the phrase exploration and investigation phase, there’s a bit of Scott of the Antarctic and a hint of Sherlock Holmes about it. It’s quite grand, almost noble. I book my car into the dealer for the following week.

Over the coming days I receive two phone calls from Gwen. Each time she reminds me about my appointment.

On both occasions she also asks ‘And you are aware you are out of warranty and liable for a charge of £80 an hour while our mechanics carry out the exploration and investigation phase on your car?’

The proper response to this inquiry would seem to be ‘Yes, I am aware because, as you will no doubt recall, it was you yourself who told me.’ But I don’t want to spoil the mood so I let it go.

The afternoon before my car is due to go in I receive a text message by way of a last reminder. Again it mentions the exploration and investigation phase. My earlier enthusiasm for the term is now beginning to dissipate.

The morning dawns and I drive my creaking, leaking, squeaking old car to the dealer. Because it is a dealer, the service garage is next to the new car showroom and I have to walk past the impossibly bronzed and suited salesman who wears insincerity like aftershave. He pulls off the rare feat of simultaneously chewing gum determinedly while also exposing a full set of brilliant white teeth.

The salesman beams in my direction until he realises that I’m walking past the showroom to the garage, then his smile disappears as suddenly as small fish being thrown back into the sea from a trawler.

I walk into the service reception. A young woman walks to the counter, her name badge tells me she is Gwen.

I’m tempted to jump right in with ‘After all we’ve been through it’s great to finally meet’ but her blank expression disarms me and I settle for a simple introduction.

At this point it emerges that Gwen has lost the sheet of paper where last week she wrote down the list of problems I want fixed on my car. So I go over it again.

Me: The automatic window on the front passenger side is not working. It maybe needs a new motor

Me: The remote keypad is locking but not unlocking the car, it probably just needs reprogrammed.

Me: There’s a little switch broken on the interior light, perhaps it needs a new part.

Gwen then reminds me again about the £80 an hour exploration and investigation phase fee before leading me outside to inspect the vehicle. Protocol dictates that, with myself as a witness, she makes a note of all the imperfections, bumps, scrapes and bruises already on the car. So I don’t come back later and claim they’ve wrecked it.

Half-way through the task Gwen has to return to the office to get a second sheet of paper.

Gwen then asks if I need a lift home and I accept. A cheery mechanic in overalls called Ken drives me up the road.

Soon we hit some morning traffic and Ken begins to tell me his philosophies on the meaning of our existence. This basically consists of him saying Sure we’re only here for a short time so you might as well enjoy it, over and over.

I can’t fault his enthusiasm, or his ethos, but somehow as I’m sitting in this strange car in traffic listening to Ken talk, I’m just not feeling it.

I give Ken the name of the road where I live and he assures me he knows it well. Indeed he then spends five minutes telling me about specific traffic issues where I live.

We come to the end of my street. I point left. Ken drives straight on. Eventually, after realising his error, he turns around in a neighbouring estate.

And then I’m home. I make a mug of coffee and sit down to do some work, opening my laptop. At just this moment my phone rings.

It is Gwen. It is not yet half an hour since she waved me off from the carpark.

‘Mr McCambridge, I just wanted to inform you that we have now completed the exploration and investigation phase on your car.’

I raise an eyebrow, archly. I lower it again and concede that it is a wasted gesture when I’m speaking on the phone.

Then we have a conversation which goes something like this.

Gwen: The automatic window on the front passenger side is not working. It needs a new motor

Gwen: The remote keypad is locking but not unlocking the car, it needs reprogrammed.

Gwen: There’s a little switch broken on the interior light, it needs a new part.

I can’t help feeling that it all sounds strangely familiar. Then I realise an awkward silence has descended. Eventually I manage to blurt out some words.

‘Well are you going to do the work then?’

‘Do you want us to go ahead and do the work Mr McCambridge?’

At this point I feel myself dragged towards saying No it’s actually a hobby of mine to pay garages to tell me what I already know is wrong with my car and then not get the work done. But I’m inherently a nice guy so I settle for a simple ‘Yes’.

Gwen starts to tell me the price of all of the parts required but my head starts to swim around this point so I can’t give a verbatim account.

Then she goes on.

‘Of course we’ll have to order the parts in.’

‘And how long will that take?’

Gwen laughs cyclically, perhaps surprised by the naivety of my query.

‘Ah well, Mr McCambridge, it might be a few days, it might be longer. You never quite know. We’ll have to get back to you on that.’

‘So I might as well come and get my car now then?’

‘Yes, your car is waiting for you.’

Then I attempt to lighten the mood.

‘Well at least I won’t have to pay any money out today then.’

‘Yes,’ Gwen responds. And then, almost as an afterthought ‘Apart from the £80 exploration and investigation phase fee of course.’

I set off on foot to retrieve my car. The dealer is about two miles from my house and, in fairness, Gwen did offer to send Ken to pick me up, but I just felt the time would pass quicker if I was walking.

Half an hour later I’m back in the service reception. Gwen hands me my key. I hand her my bank card. My car still has the broken keypad, window and light. I know exactly what needs done, just as I did before I dropped the car off. In fact the only material difference from earlier in the morning is that I’m now £80 worse off. The car will be fixed though, at some undetermined point in the future.

Gwen follows me into the carpark. The last thing she says before I drive off is ‘I’ll be in touch.’

I have no doubt of it.

One thought on “Gwen and the art of motorcar maintenance”